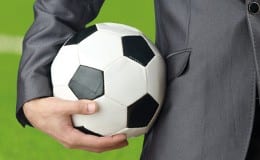 Well, that’s another Football League season all but over with. There’s been some notable teams exceeding expectations (Bournemouth, Burton), a fair few underachievers (Fulham, Wigan, Tranmere) and an awful lot of teams being, well, just average.

As a bunch of Brentford and Bristol City fans, here at Now Towers we’re all congratulating ourselves on a rare good year. We’re sure we’ll be back to mid-table drudgery by this time next season though, so let’s make the most of the opportunity to see what we can learn from the beautiful game. Prepare yourself for a whole host of bad, footy related puns!

First off, we’re by no means the first to draw parallels between the worlds of sport and business. There have been Harvard Business School Case Studies of Fergie’s management style (that’s the ex-manager, not the one from Black-Eyed Peas) and there seems to be an increasing appetite among execs to learn from the likes Gareth Southgate or Steve Backley, so we must be on to something.

There is of course, a lot to be said about successful football managers’ passion, their desire to win, and their tactical nous – we don’t doubt that if Jimmy-Floyd Hasselbaink managed Burton Menswear instead of Burton Albion, he’d still be a success (though arguably not as well dressed) but there are more transferable lessons than these to be learnt from our ball-juggling counterparts.

Here’s our league-inspired lessons to ensure you stay at the top of your marketing game for what remains of 2015:

1: Consistency is key
Whether on the football pitch or pitching for business, being inconsistent rarely brings long-term results. Yes, you get the odd day when you feel like you’ve hit the jackpot: that big deal comes in out of nowhere or the consumer press picks up on a press release and drives a heap of new traffic to your website, but if you’re still dining out on that a month later, something’s wrong.

It’s the marketing equivalent of knocking 5 past your local rivals then losing at home to Crewe in the next game.

Being consistently above average – delivering a steady drip of content with which targets engage, rather than just concentrating on the big-ticket campaigns – is like picking up those scruffy 1-0 away wins on a wet Tuesday night – no-one notices at the time, but they will at the end of the season: no-one ever won anything with inconsistency.

If you don’t have that base of solidity, it just makes the overall job tougher. Just ask a Derby County fan

Our Awesome Sticky Content programme is the “1-0 to the Arsenal” approach to marketing: it creates a year-round, rock solid foundation to your marketing that brings in consistent sales leads and web traffic – no peaks, no troughs, just solid regular interaction.

Think of it as signing Kevin Davies: you’re not going to be the envy of your local rivals in the glamour stakes, but he’ll do a solid job.

2: The sum’s bigger than the parts
Just ask Eddie Howe what a difference it makes when everyone has a sha

red view of success and work
together to achieve it. There are no single big names carrying Bournemouth to the top flight – it’s all down to team cohesion and hard work. And that’s how good marketing should work too: Relying too heavily on any one conduit will almost inevitably end in failure: All elements of the marketing mix – Social, DM, web, events, and everything else – MUST present a cohesive, joined up front. We work with our clients from the off to get this right, with Marketing Hackdays involving your marketing, sales, products teams – in fact whoever you want in the room – to ensure that your programme gets goals from all over the pitch.

3: The stats don’t lie
It’s easy to let emotion get in the way of clear decision making – just ask Leeds United’s chairman – he’s made more rash decisions than most this year, and look where that’s got the club. Marketing can be the same: Too many times we’ve seen projects protected from change because the CEO likes X or doesn’t like Y, or good projects being dumped because a new marketing director wants to make his or her mark.

Without proper observation (or analysis, in our book) of what’s working and what’s not, it’s impossible to see what decisions should be taken and what change shouldn’t be changed. Fergie could see that and that’s why we use Really Intelligent Web Analytics. Think of it as the “Moneyball of marketing” – we analyse what’s performing, what’s not, and work with you to make the right changes, in the right areas to ensure your marketing delivers results.

4: Seek wise counsel
Like a football manager, everyone thinks they can do a marketer’s job. In in-house roles, I’ve had everyone from accountants to customer service temps offer their two pennies on how I should be doing my job. (the suggestions are usually along the lines of “you should do more facebook”). It’s the equivalent of sitting for 90 minutes listening to that bloke behind you offering pearls of footballing “wisdom” to anyone who’ll listen.

Having the courage of your convictions and having trusted , independent support and counsel outside of the business can make the world of difference in getting intelligent insight and gaining buy-in from other stakeholders.

We help clients do this in lots of ways: Perhaps as a “caretaker manager” until the right internal resource is found, but more often than not as “assistant manager” – working alongside you to share the pressure and get the job done well. Think of us as the Terry Connor to your Mick McCarthy.

5: You’re only as good as your last match
…Or your last comms piece if we’re being marketing-y. That long campaign of activity is plugging away, gaining your company the respect and results expected of you, but clients and colleagues can also have short memories – just like football fans – and if your last campaign was the marketing equivalent of a 4-nil drubbing, that’s the one that’ll be remembered.

Marketing Automation is our way of mitigating against that: think of it as your on coaching and scouting team – keeping an eye on what what elements are getting cut through with your clients, which need relegating to the subs bench, and which need a bit more attention to get the most out of them. Our MA programmes enable you to understand exactly what happens when your campaigns leave the tunnel – it identifies who’s clicked on what, which web pages they’re interested in and, over time, develops a full picture of which of your services they’re receptive to. By the time you’ve nurtured them to a qualified lead, your sales guys are left with a simple tap-in to seal the deal.

Have we missed something? Let us know if there’s any marketing lessons you’ve picked up this season (except, perhaps that you should never apply to be Nigel Pearson’s press liaison) in the comments box below

Met with Now team briefly online and everything is now just tickety boo!