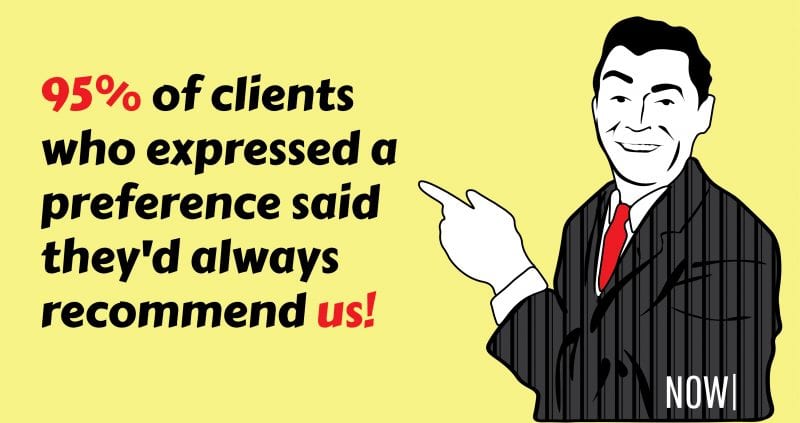 If we told you that over 95% of our clients would recommend us to a friend or colleague, would you believe us?

If we said “we’re a small creative B2B marketing agency that strives to innovate. Some people like our innovative ideas more than others and we know we’re not for everyone” is that easier to swallow?

Marketing isn’t what it used to be. Back in the day it was sort of OK to just dream stuff up. We called it “aspirational brand strategy”. British Airways aspired to be “the world’s favourite airline”, the Bank of Scotland was our “friend for life”, Coke told us we’d never get a better feeling than the feeling we got when we guzzled their cola.

It was all marketing tosh, but nobody bothered arguing. With no Facebook or Twitter to undermine the bland or the unbelievable we just put up with branding messages that were, frankly, hard to swallow. Things are different now. If the public doesn’t buy the message, they storm Twitter or Facebook (with minimum effort) to bring brands back to earth with a bump.

Lots of businesses still don’t get this

This idea that branding and positioning offers the opportunity to sweep aside the negative and brainwash customers with positives is still common today.

Small startups tell us they want to be positioned as mature, established operations because startups are risky and struggle to inspire trust. CEOs in large enterprises want to position their company as an innovative thought leader, but they often struggle to offer up much evidence of any original thought.

We’re working in an age of social, just in time marketing. Real, honest debate powers everything. The wishy washy superficial stuff has had its day. So why are so many marketers uninspired by the real stuff happening on the ground; especially when the reality on the ground is so cool?

In the the late 1950s, advertising agency Doyle Dane Bernbach introduced US customers to the oddly shaped Volkswagen ‘Bug’ with their “We’re ugly but…” campaign, creating straplines like “It’s ugly but it gets you there” and “Ugly is only skin deep”. The move opened up the compact car market in the US by addressing the big weakness raised by focus groups head on. It created interest quickly and set the scene for honest communications down the line. And customers liked that.

When companies open up and communicate great achievements honestly, customers love it. It creates trust and empathy.  Some marketing eggheads are starting to call this the art of “pre-suasion” (marketing science expert Robert Cialdini has just written a book called “Pre-suasion” and that’s got the term trending)

It’s pretty well accepted that companies perceived as trustworthy have greater influence, but that winning customers’ trust takes time. In “Pre-suasion”, Cialdini argues that it doesn’t. He says it’s possible to achieve instant trustworthiness by employing a pre-suasive strategy.

Pre-suasion rejects the idea that all of the most favourable features of an offer or an idea need to be presented upfront. Instead, Cialdini says we should be referring to the weakness early-on. The advantage of this sequence is that, with perceived truthfulness already in place, when the major strengths of the case are advanced, the audience is much more likely to believe them.

Whether they realise it or not, more and more companies are deploying pre-suasive strategy in their communications campaigns but more companies need to be following their lead.

Take Uber’s innovative move to introduce a driverless taxi service in Pittsburgh. They’ve told us it’s early days and, in truth, these driverless cabs don’t really work yet, but no one cares about that. What’s exciting is that driverless taxis are coming. They’ll be available to all of us one day and Uber got the ball rolling.

In reality, successful companies are built on great vision and innovative ideas, but truly visionary companies know it’s impossible to innovate and always get things right. Customers understand this. They respect companies that try to make things better by doing things differently. But customers aren’t stupid. They know that doing things differently always comes with some bumps in the road.

The Now Communications team are awesome, they have a complete knowledge of the competitive landscape, which makes them unbeatable.