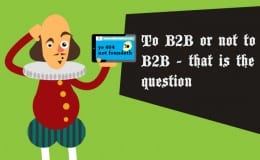 “What a piece of work is a website” – William Shakespeare

His point is that, with really solid analytics to build on, there’s a pretty good chance you’re going to spot sales opportunities earlier and develop them faster. It’s the “look into the seeds of time speech” from Macbeth that he uses to get this point over (It’s the bit in ACT 3 when Macbeth and his buddy Banquo are doing the hurly burly with the three witches. Banquo’s all ears because the witches seem to be able to predict what’s coming next in the play…but that’s not really important right now).

What’s important is that this guy who was doing “content” 400 years ago is still relevant in business today.

If it was part of the communicator’s toolkit 400 years ago, Shakey didn’t just use it, he redefined it. He took established storytelling structures (comedies must be in four acts, tragedies need to be told in five) and mixed it all up to make something new. He took characters that had existed for centuries and gave them lines that defined them forever (Mark Anthony didn’t say “Friends, Romans, countrymen, lend me your ears”… Shakespeare just made that up).

The real tragedy is that Shakespeare didn’t get to play with today’s communicator’s toolkit. Stephen Fry would be nothing on twitter compared to Shakespeare. Shakespeare would be all over the internet like Falstaff’s rash.

Like a lot of business savvy modern day creatives, we reckon that Shakespeare in 2016 would have turned his pen to a bit of business advice too now and then. Nothing too big to distract him from the epic gigs, just the odd advice book to tide him over during the quiet times that come with plague of feuding with the French.

Something like Will’s Website Wisdom perhaps? It’s the top five list of tips for B2B marketers we think Shakey would have promulgated had he been alive today.

Test, test and test again. Great communication is not about guesswork. It’s about getting  ideas in front of your audience as quickly as possible and eliciting feedback. Have you ever seen the side notes on any of the Shakespeare folios? They’re riddled with changes and comments based on audience reactions. He was the most agile content creator of his time. He’d have given “all his fame and pot pot of ale” for the kind of user-testing and analytics we have access to today.

Steer clear of the “sound and fury, signifying nothing” problem

“Words without thoughts, never to heaven go” said Shakey, and the same is true for much of the foul, deformed content marketing that’s cluttering up the internet these days.

If the bard were ever to hit us with link bait headlines like 10 things you didn’t know about B2B marketing (or insert topic) we’re pretty sure the substance of the matter would meet the promise of the headline. Too often, post the click we’re faced with a tale told by an idiot signifying nothing.

Remember that “Strong reasons make the strongest (calls to) action”

Great websites are usually designed to generate business more than win awards for creative excellence, so when it comes to wireframing Shaky would say that “brevity is the soul of wit (and a good landing page)”. He’d have loved our Really Intelligent Web approach to website design because it starts by reducing even the most complex B2B proposition down to something that’s easily understandable on a 5 inch mobile phone screen, no more, no less.

Shakey hated the superfluous! If he were suddenly planted into the digital marketing world he’d have been the first to understand that today’s web surfers need to “see wonders” that keep them hooked well beyond the average 50 millisecond attention span of today’s digital native.

“Suiting the action to the word and the word to the action” was a basic for Will, so he’d have loved the challenge of creating a nimble experience capable of engaging an audience regardless of whether they were on a desktop, a tablet or a mobile device.

Thank you for reading. Now get thee to a theatre.