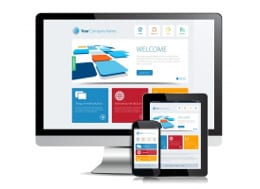 How come the vast majority of the 100 highest ranking websites in eLearning still have websites that don’t work well on mobile? Despite usage patterns trending out the roof for mobile web access, less than 4 in 10 of the biggest players in the L&D industry have mobile marketing strategies that use responsive websites (websites that render properly in any device).

Here at the NOW creation hub we’re all about the responsive. Click to any tech blog these days and you’ll be bombarded by stats, infographics and studies all telling you how quickly the mobile internet landscape has grown, and what it means for B2B digital marketing.

Let’s distil this down to the key points that matter most right now:

In 2013 the percentage of tablet-owning UK households more than doubled from the previous year, to 24%.  (The Communications Market 2013, OfCom)

So accessing the web from mobile devices is a massive growth trend. In fact, back in 2011 those clever clogs at Morgan Stanley predicted that this year mobile internet access will surpass fixed internet access (from the desktop) globally.

When Morgan Stanley’s Mary Meeker and her team made this prediction back in 2011 they could not have known how close to the mark they would be. In China mobile internet access had outstripped desktop access by mid-2012, so from where we stand today, the global dominance of mobile web seems an inevitable outcome.

Why bother with browsers on the go?

So what are these folks doing with their devices on the streets, on the train and on the go? Well as it turns out, when you make it super easy for surfers to convert and conduct commerce on the go, thats just what they tend to do.  Take a look at the analytics overview below. Just three weeks after going live with the responsive upgrade we did for them, landing page conversions are up nearly 330% on tablet devices and over 122% on smart phones. If you’re actually selling products and services online, as is the case here, then notice how real transactions are up 500% on tablets and 112% on smart phones.

So what’s the hold up?

“Where do we start?”, “Sounds a bit complicated”, “Don’t we need to redesign our website from the bottom up?” and “Why would we go responsive now when we’ve not even got our desktop site converting efficiently?”. These are the “good excuses” most marketers today make when they try to justify the decision to leave the responsive option on the table for another day, meanwhile, there’s a bold group of marketers running riot with the new business opportunities nurtured via mobile every day.

Digital marketers don’t do magic, but they can talk like magicians at times. Truth is, most digital marketing companies make responsive design sound just a wee bit harder than it actually is. After all, why would any digital design agency want to add responsive functionality without a fuss when the current blend expectation coupled with a fear of the unknown means it’s easy to package up a Pandora’s box of marketing apps that go way beyond the brief?

Over the past few months, we’ve redesigned dozens on websites to make them engage prospects more and convert leads better. So far, the web architecture required to make content responsive on any device have never taken more than five days to deliver.

Calibrating the perfect mix of SEO’d content powerful enough to convert prospects into customers regardless of the platform they choose to use requires long terms analytical study and an agile approach to campaign planning. But the clear and present challenge of adding new opportunities for prospects to engage via mobile channels is, in itself, no more more than a business week away.

Want to make your website work effectively on tablets and mobiles: Talk to us now about adding responsive design to your existing site in five days or less.