Learning Technologies vs World of Learning 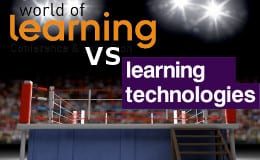 Over the past few months our Learning Technologies vs World of Learning project has been asking B2B marketers in L&D to rate the two events that traditionally dominate the UK trade show calendar.

The results? Well it’s bad bad news for World of Learning as the findings of our tradeshow showdown survey puts the Birmingham based L&D show firmly in the shade of London’s Learning Technologies event.  But is a good day for LearningLive, which our research solidly identifies  as the industry’s new “significant other” business event in L&D.

Totally independent and fiercely unofficial, the purpose of this exercise is to help us help you. This survey is not sponsored or supported by either show or any affiliate in any way, although reading through its findings, you’d be forgiven for thinking it was.

LearningLive is the industry’s new “significant other” business event. If B2B marketers in L&D are turning their backs on the two trade show giants in L&D, then it’s the fast growing LearningLive show that’s reaping the benefits.  This is the show that over 80% of you specified (without prompting) when you chose “other” in our survey.

When we last did this survey three years ago, 85% of you said you regularly attended both shows.  Today this number is less than 25%.  This is interesting because general perceptions of both shows have remained fairly constant. Three years ago, you rated Learning Technologies above World of Learning in every category we asked about (networking opportunities, sponsorship packages, quality of visitor, general value for money). But while World of Learning was constantly rated lower than Learning Technologies, over 8 in 10 of you routinely went along anyway, took stand space and generally supported the Birmingham based show.  Now just 1 in 4 of you do this.

*128 people participated in this survey

So what did we learn for B2B marketers in L&D?

First up, it’s important to stress that the majority of people who take part in our surveys work in learning and training businesses that have a reasonably strong connection to technology.  For this community, the World of Learning show has always been the poor relative to Learning Technologies.

Three years ago, when budgets were less stretched, participating in what was rated the industry’s second best trade event (for training companies with a technology bias) may have been a nice to have, worthwhile addition to the marketing mix, but when marketing budgets are tight, nice to have additions have much less chance of making the draft.

If recessions are opportunities to aggravate and innovate, then LearningLive seems to have spotted the empty space and scored. The questionnaire we used for this survey had no mention of LearningLive. Respondents were not prompted to choose from a list of alternative trade shows, yet 80% identified LearninngLive as the clear alternative in L&D events today, especially when asked about value and sponsorship deals.

Looks like the L&D event has found its third way.